Start typing and press
Enter to search
Skip to content

From the moment we meet it’s clear that Womany Media Group founder and CEO Wei Shuan Chang is an earnest woman.

Regarded as one of Taiwan’s thought leaders in the field of female empowerment and entrepreneurship, Wei Shuan answers my first question (“Tell me a little about Womany”) not with an answer, but with a request:

“Actually, I’d like to know a little about you first, if you don’t mind.”

Only after I’ve satisfied her with details of my bona fides as a writer, along with some light back and forth establishing my history in Taiwan and Chinese language ability (though the interview is held in English at her request and my convenience), does she begin telling me about Womany.

“In a nutshell, Womany Media Group was established in 2011 as a gender-friendly media community group, with a vision of leading programs to empower women,” she begins. “Gender, feminism, empowering women in everyday life, and making the world a better place in general are our core concerns.”

This proves to be quite a mission statement, one embodying Wei Shuan’s overall advocacy for gender diversity and equity.

After this brief exchange of credentials, our conversation gets into the area of gender roles, and how such roles might differ from place to place.

“One of the things that makes Womany unique is that our content specifically seeks to avoid gender stereotypes in our everyday life. Indeed, a lot of what we do is to deconstruct these gender roles, and ask ourselves – and our readers – how these roles play out in everyday life.”

Gender roles, of course, are far more fluid in Taiwan than they’ve been in the past, and certainly far less binary than they once were, with men expected to be the breadwinners and women expected to stay home and take care of families. But on another level, having made so many strides towards acceptance of gay and lesbian culture has also contributed to an opening of how gender roles can be expressed. I bring up the idea that Taiwan seems to be a far less macho culture than say, America, and that in Taiwan seeing two men holding hands is neither unusual nor an indication that the men in question are lovers.

“I agree with you that gender roles are more fluid here in Taiwan, sure, and that men here are way less hung up on proving their masculinity than in the West. But in some cases, if you were to see two men holding hands who told you that they weren’t a couple, it doesn’t necessarily mean they aren’t actually a couple. They may just be scared about coming out of the closet. So clearly, we still have some way to go.”

I ask Wei Shuan if she has any observations on how the experiences of foreign women in Taiwan might differ from that of native born women. She quickly disabuses me of the notion that women (and by extension, I suppose, people) can or should be divided by national identity.

“Every woman comes from a different background, so there’s no reason to separate foreign and Taiwanese women. I mean, there’s so much difference between women in Taiwan that it’s kind of difficult to separate women by nation.

Eliminating the concept of Us and Them

Like Chu Ping interviewed earlier in this column , Wei Shuan is a firm believer in eliminating the concept of women and tamen (us and them) that’s still a common feature in Taiwan society. “It’s sort of a concept that needs to be eliminated. We’re a small island, and we need to have an open door philosophy, to really eliminate the concept of foreigner to create a more inclusive society that will convince talented people, women and men, that they can indeed achieve their goals here.”

I start asking Wei Shuan about her work philosophy, specifically if she finds the maintenance of work-life balance challenging. For the second time, she answers my question with one of her own.

“Is this a question that you ask male entrepreneurs?” she asks, and I realize quickly how a question of this sort might be considered, if not sexist, at least cliche. Wei Shuan laughs it off.

“Don’t worry, it’s a question that women professionals hear all the time, as if somehow a woman should have a different idea of work life balance than a male counterpart. For me, I don’t really see the division between work and life. I consider my life holistically, and try to make every minute count, and make it meaningful. So right now, we’re working. But we’re also talking. Sometimes I’m working and playing at the same time. My slogan is if you lead an integrated life, that means you have an ideal life.”

Wei Shuan then shares with me a mnemonic she’s developed as sort of a personal work philosophy: AN IDEAL.

“A is for Appreciation, reminding me to feel grateful for everything I encounter. N is to build up my Neighbors who support me and make me feel safe. I is for Inquiry, constantly reminding myself to know who I am. D is to process with Design thinking in the way of your life. E is to Experience the moment and live at the moment. A reminds me to live Ahead, to think from the future and to plan everything out so that I know where I’m going to be. L is to remind me to keep Learning, to learn from every challenge, from every person I meet.”

As one might expect in an interview with the CEO of a female-driven media company, the conversation naturally turns to the issue of women in media, both on the screen and behind the scenes.

“Challenging and changing the lack of diversity and women’s narratives in media is part of the core mission of Womany,” Wei Shuan says. “I was reading the other day that less than 7% of the screenwriters in Hollywood are women, which of course leads to women being portrayed as two dimensional, as love interests or the objects of men’s gazes rather than fully fleshed out human beings. This is something that we are working on changing, and Womany has hundreds of writers around the world, writers from diverse backgrounds. We use our site not just as a place where women writers can publish their work, but where writers of all genders can talk about gender issues.”

From gender issues, the conversation turns to travel. It’s a subject about which Wei Shuan feels strongly, and also unsurprisingly, one in which gender plays a key role. Before getting to the initial question of how one’s gender impacts their own travel experiences (an issue explored in greater detail by Taiwan Scene guest columnist Jenna Lynn Cody）, Wei Shuan shares with me data that she’d recently gotten from Taiwan’s Ministry of the Interior indicating a fascinating statistic. 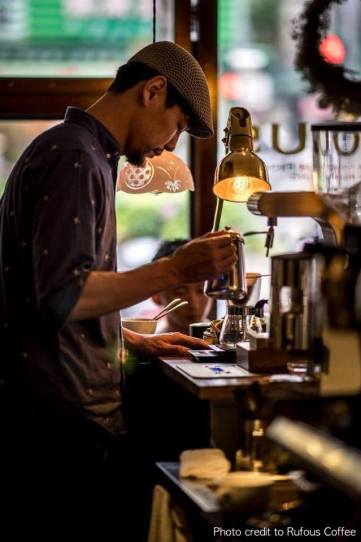 “So in Taiwan, when we look at the under 30 age group, there are more female travelers than male travelers by a margin of 1.5 to 1. But once we get into the over 30 age group, the numbers change, and by 35 the ratio has reversed. Women over thirty are expected to stay at home and take care of their families, while men…well, they don’t have this kind of burden. And it isn’t just in Taiwan, but globally. But getting to your initial question of how gender impacts travel, yes, of course, women traveling solo face issues that male counterparts don’t face. Safety, of course, is an issue. It’s simply safer for men to travel alone than women, though I think this is getting better.”

Perception, according to Wei Shuan, is another issue.

Before we part ways, I ask Wei Shuan for her own travel recommendations, and she agrees that with so much to choose from, boiling it down to a short list is difficult.

“I mean, Taiwan’s got a great cafe culture, maybe one of the best in Asia. I really like the Rufous Cafe in Taipei. When I’m in Taichung, I go to 1987 Kitchen. And in Tainan, A Room of One’s Own (自己的房間 ) is really special.”

Including cafes in various cities in a list of travel recommendations is a good sign that the person making the list is busy. So I ask Wei Shuan where she goes for more long term relaxation.

“I am really fascinated by the lovely landscape in Taitung every time I go there. Two of my favorite spots there are Jiaming lake (嘉明湖 ) and Luye township (鹿野高台), though I’ve yet to go there for the hot air balloon festival. Tainan is the heart of Taiwan’s culture. There’s a great bookstore there called Lingo (林檎二手書室). But I spend a lot of time in Taipei, which has great energy and atmosphere. I’ll often head to Songshan Cultural and Creative Park (松山文創園區 ) and Yue Yue & Co  ( 閱樂書店) to relax after work.”

“And of course, people are always welcome to visit the Womany office. We call it Womany Wonderland, and we hope that this space can become one of the landmarks of the gender movement, a place where people can come to have conversations, to have a free, non-judgmental space to have discussions and to explore gender issues.”

We Support and Empower You

Our conversation almost done, I have one more question for Wei Shuan about something I’d noticed immediately when looking over the Womany website. Though the website is entirely in Chinese (with an option for simplified characters as well as traditional), one English phrase floated like a small raft in a sea of Chinese.

We support and empower you.

Wei Shuan smiles at the question.

“Different languages have different beauty and logic. So for me, I wanted to have something that was concise, and for me, English really worked best. Like our name, Womany, which is meant to convey the idea that Women are many, and you are the only, We support and empower you conveys our message best.”